What I owe Shiva most is this: to tell the story. It is one my mother, Sister Mary Joseph Praise, did not reveal and my fearless father, Thomas Stone, ran from, and which I had to piece together. Only the telling can heal the rift that separates my brother and me. Yes, I have infinite faith in the craft of surgery, but no surgeon can heal the kind of wound that divides two brothers. Where silk and steel fail, story must succeed.

The main reason why I wanted to read this book was that it kept on popping up everywhere when I was browsing the internet looking for reviews and material on Arundhati Roy's The God of Small Things (a big favourite of mine). The two novels were often described as similar, although their settings sounded completely different: Roy's book takes place mainly in India and tells about the life of a family with a pickle factory in Kerala. Abraham Verghese's novel is set (mostly) in Ethiopia and describes characters working in a local mission hospital.

But there are major similarities. The main characters of both novels are twins - and twins with a special, telepathic connection too. In Cutting for Stone, the entire hospital community is shocked and surprised when one of their nurses, a devout and virginal nun, Sister Mary Joseph Praise, gives birth to twin boys who are conjoined at the head by a thin cord of flesh. The alleged father, Sister Mary's colleague and brilliant surgeon, Thomas Stone, disappears soon after the birth and the boys' origin remains a mystery. The twins, Marion and Shiva Praise, are brought up at the hospital. As they grow up and try to cope with teenage problems, the nation itself is experiencing its own growing pains in the form of the cruel Emperor Haile Selassie I, not to mention corrupt politicians and opposing revolutionaries.

This may sound like a strange comparison, but Cutting for Stone feels, to me, like a very Indian novel. This is probably just because I couldn't help comparing it to Salman Rushdie's Midnight's Children, which also has a pair of boys growing up in a nation in turmoil. Actually, Verghese himself was born in Ethiopia, but his parents are from Kerala, India. The twins in Cutting for Stone are also half-Indian, because their mother, Sister Mary, is an Indian immigrant to Ethiopia. So the novel is autobiographical and one of the twins also later immigrates to America to work as a doctor, just like Verghese himself did.

The novel contains an interesting mixture of nationalities and identities, migrations and immigrations across the globe, from Asia to Africa to America. All of the main characters in the novel - and many others - live in some sort of exile from their home country or place of birth. Marion, the narrator of the story, is an example of a person who has no home in this world, who does not feel like they fully belong into any country or continent. This homelessness also creates restlessness, the need to be on the move. But even if you don't have a home, you can still feel homesick as you long for people, not places. Although he was born and raised in Ethiopia, Marion is treated like an outsider:

Despite being born in the same compound as Genet, despite speaking Amharic like a native, and going to medical school with him, to Solomon I was a ferengi - a foreigner.

Another novel that Cutting for Stone reminds me of is John Irving's The Cider House Rules. Again, the setting is completely different, but - as this novel shows - geography is irrelevant in terms of medicine: people get sick and doctors are needed everywhere. The Cider House Rules also tells about a boy with a mysterious birth-story, growing up at a clinic and becoming passionate about medicine at a young age. Both novels also include detailed descriptions of medical conditions, symptoms and treatments, surgical procedures and hospital work. You can see that Verghese, who is also a Professor of Medicine, knows what he is talking about when he describes heart surgery in detail from the very first cut to the last stitch, or the importance of Gray's Anatomy (the book, not the TV series!) ;), or the atmosphere in a delivery room!

Cutting for Stone is an impressive novel, beautiful and sad at the same time in a way that only great novels can be. The first few chapters of the book are so full of suspense and action, that you get sucked into the story right from the start and it's difficult to stop turning the pages. The novel is about the age-old problem of creating an identity and finding a home, but it is also about fixing holes, as Marion says in the beginning. Not only surgical holes, but also wounds that divide families, couples and twins - and even nations.

But... here be minor spoilers: For the last 100 - 150 pages I felt like I was reading a completely different novel! The style seemed to suddenly change (for the worse!) and the events that took place were straight from a romance novel or soap opera. I couldn't understand Marion's uncompromising hate and how he was so cruel and unforgiving towards certain other characters. The dialogue also seemed to deteriorate as the characters became more and more shallow. Still, I have to admit that the actual ending was still a shock. 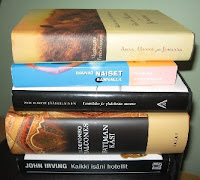 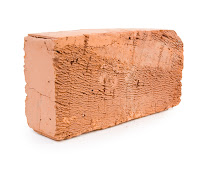 Skateboards are TV and so are girls and boys except Ma says they're actual, how can they be when they're so flat? [...] Grass is TV and so is fire, but it could come in Room for real if I hot the beans and the red jumps onto my sleeve and burns me up. I'd like to see that but not it happen. Air's real and water only in Bath and Sink, rivers and lakes are TV, I don't know about the sea because if it whizzed around Outside it would make everything wet.

Five-year-old Jack and his Ma live in Room, a single square space 11 feet by 11 feet in size. They have Skylight that changes colour depending on whether it is night or day. They have Bed to sleep on and Bath to wash in. Sometimes Door opens and a man, Old Nick, comes in to visit. Jack has to hide in Wardrobe and be quiet while Old Nick speaks to Ma and makes Bed creak...

From the very first pages, I was hooked. It takes awhile to get used to Jack's unusual style of explaining things, but after a few pages, all you can do is admire the author's talent at creating such a unique voice. The reader always has a slight advantage: knowing what Jack doesn't know and cannot understand, i.e. that Jack's mother has been kidnapped and locked into this room against her will. That Jack was born in Room and does not know (and is finding it hard to imagine!) anything Outside it. That they are prisoners and Old Nick is their captor. Jack's mother has tried to make Jack's life as normal and happy as possible, which is why she has tried to protect him by not telling him the truth about their situation: that Room is a prison and what they should do, what they need to do, is leave Room, escape and live Outside.

Inside Room, Ma and Jack fill their days with playing games, singing songs, telling stories and reading the five books that Jack has, over and over again. They have Phys Ed, where they run and jump around Room to try to keep fit. They have Sunday Treat, where they get to ask for something special from Old Nick in addition to their usual diet. All this is just a game for Jack - he doesn't know that this is not "normal" life. Room is not only his home, it's his entire world. Everything Outside is "TV", i.e. not real. He is curious, but also scared of the Outside world, which to him is as fascinating and strange as outer space:

Beep beep. That's Door.
I listen very hard. In comes the cold air. If I had my head out of Wardrobe, there'd be Door opening, I bet I could see right into the stars and the spaceships and the planets and the aliens zooming around in UFOs. I wish I wish I wish I could see it.

Every weekday Jack and Ma climb as near Skylight as they can and "do Scream": they shout and make as much noise as they can. Sometimes, in the night, Ma flashes their lamp at Skylight: three short flashes, three long... Jack only sees these habits as funny games that they play, but Ma is getting desperate to escape...

Warning: do not read too many reviews of this book before you read it, because it can be easily spoiled and I think some reviews already say too much...

You can also visit a virtual Room, created on the basis of the book. :)