She and Lauri needed to be together, side by side, eating and sleeping and playing cards, telling fortunes in candle wax, dragging heavy bags of potatoes home from market, keeping out of the adults' way when they had hangovers, doing all the things that just naturally fell into place when there were two of you, almost all the time... the way they used to be.

I came across this book while I was searching for another. I wanted to read Helen Dunmore's The Siege about the blockade of Leningrad in 1941, but since I couldn't find that, I decided to read The House of Orphans instead.

The year is 1901, the place is Finland. Eeva, the orphaned 16-year-old daughter of a revolutionary, is sent from the "House of Orphans" to be a housekeeper for Thomas, a widowed country doctor. Thomas soon becomes fascinated by the quiet orphan girl who does not want anyone to know that she can read and write, speak several languages and has fairly radical political views.

The first part of the book is written almost entirely from Thomas' point of view, which is an interesting choice. Eeva remains in the shadows, a complete mystery to the reader. What is she thinking, how does she feel, what are her plans and dreams for the future while she does the housework for a lonely doctor in the middle of a pine forest?

I thought the first part of the book was quite slow, almost boring in its predictability: a widowed country doctor falling for an intelligent, mysterious young maid. How original... 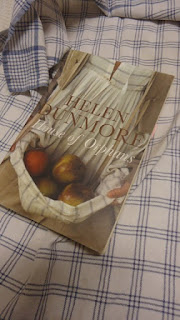 But then everything changes. The peaceful, solitary homeliness of the doctor's cottage transforms into the energy and clamour of a growing city: the second part of the book is set in Helsinki. Eeva finds her childhood friend, Lauri, who is taking part in the emerging underground uprising against the Tsar's rule. And Eeva seems to suddenly gain a whole new personality! She becomes a totally different person from the one that stayed quiet and invisible in Thomas' house and at the orphanage. But still she remains only in the fringes of the action...

Eeva was like the bird in the tale, that blew from one end of the hall to another, from dark night into dark night. She had no connection here. She was an orphan and a girl from nowhere, from generations of people who had owned nothing and left no mark on the earth.

Unfortunately she left no mark on this reader either...

The novel was totally different from what I expected. From the title, I figured that this would be a story set in an orphanage. But the "House of Orphans" is the setting only in the first few chapters of the book. And from the cover, I imagined a rustic historical novel, perhaps set in the rural countryside. That was wrong as well. Then, for the first half of the book, I thought that it would be a typical love story between a wise older man and a young, witty girl. But it wasn't that either. Then I thought that there would be more historical facts about the underground movement against the Russian Tsar in the beginning of the 20th century. But all the politics remained strangely in the background as well.

So I don't really know what to think of this book. I guess it tries to describe the resistance of the Finns against Russian domination through the eyes of a young girl, but - although the idea is interesting - the book itself leaves you wondering what the author was really trying to achieve. "Fine but oddly unsatisfying book," as Jane Gardam writes in her review in The Guardian.