Eimear McBride: A Girl is a Half-formed Thing

For you. You'll soon. You'll give her name. In the stitches of her skin she'll wear your say. Mammy me? Yes you. Bounce the bed, I'd say. I'd say that's what you did. Then lay you down. They cut you round. Wait and hour and day.

I've read a book in a new language. A language that I wasn't aware I understood (but I do, sort of). A language that I didn't even know existed. A language that resembles English, but follows almost none of its conventions and rules. A beautiful, raw, intimate and intriguing language. The language in which Eimear McBride's debut novel A Girl is a Half-formed Thing is written.

When a novel begins with the paragraph quoted above, you know that you have your work cut out for you as a reader. Some will be put off by it. Some might simply give up and not even try to understand what's being said. Some (like me) will feel frustrated, but curious at the same time. And keep on reading.

The novel's narrator is a girl growing up in a fanatically religious environment with her mother and brother. The brother suffers from a brain tumour as a child, which traumatizes the family members, each in their own way. The girl seeks solace from sex, the boy from the alternate realities of video games. When tragedy hits, the dysfunctional family is forced to come together. Terrible things are said, secrets are kept, some fall silent entirely...

McBride's language is so unique that I probably won't read anything like it ever again. It takes a while to get used to, but strangely, you do.

Some sections of the book are more lucid, grammatical, "proper" English, if you will: We're in this. She and me together. Doing all the things we could to make us mad to make a tale. Dancing up upon the tables. Unbuttoning our tops. Throw our knickers in the air. Get out of this pub. Don't have your sort round here.

Other parts are almost impossible to understand: Stick it ionthe don'tinside wwherhtewaterisswimming htroughmynoseandmouth throughmy sense my organds sthroughmythrought. That. A. My brain. He. Like. Now. Yet a powerful sense of emotion is conveyed. The broken, unruly language only makes the effect more intense. This is a book that you feel, even if you don't understand every single sentence.

In an interview, McBride explains: "It seemed to me that when attempting to tell a story from a point so far back in the mind that it is completely experiential, completely gut-reactive and balancing on the moment just before language becomes formatted thought, English needs to be made to pick up its feet and move." 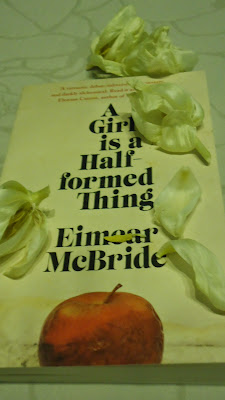 McBride doesn't really describe what her protagonist feels and thinks, but she paves a linguistic pathway into the girl's conscious and unconscious thoughts and emotions. Almost like a window into the girl's fragmented, vulnerable soul, built by words.

Your life was better than it been I said I love you. Please tell me you love me. You sleep. You sleeping. When I know. I think your face the very best. When we were we were we were young. When you were little and I was girl. Once upon a time. I'll mind you mind you. Now. Not then. And I genuflect your quiet bed. I kiss your face. Leave the room. I'm going. Sleeping. Just like you.

This is one of the strangest, most beautifully odd books that I've ever read. It's demanding and even infuriating, but also rewarding and deeply moving.

The novel was originally rejected by several publishers until, after 9 years of waiting, a small English company had the courage to publish it. The rest is history, as they say. The novel won numerous prizes, including the Goldsmiths Prize and Baileys Women's Prize for the best novel written in English in 2014 (beating e.g. Chimamanda Ngozi Adichie, Jhumpa Lahiri, Audrey Magee and Donna Tartt whose novels were also shortlisted that year).

Unfortunately, I doubt many foreign publishers will be thrilled by the idea of trying to translate something like this. If reading the novel is a challenge, translating it may be near-impossible.