Then they were gone, towards what they did not know, and until now had not dared even imagine, in their giant library on wheels. It felt like opening a book about which they knew nothing.

I hadn't heard about this book before it caught my eye in the library. A road trip across England in a huge mobile library sounds like every bookworm's dream! :)

Bobby Nusku is a 12-year-old boy whose mother has disappeared from his life and whose father would prefer that the boy didn't exist. He spends his days obsessively collecting and cataloguing traces left behind by his mother: strands of her hair, pieces of her clothes, photographs... His only friend is Sunny, a boy who dreams of becoming a cyborg in order to protect Bobby and himself from bullies.

When Bobby meets Val, the cleaner of a mobile library, and her disabled daughter Rosa, his life changes forever. When the three need to run away, the mobile library and the stories within it provide a literal, and literary, escape into other places and other worlds.

What follows is a crazy, gripping adventure, full of eccentric characters and fantastical twists: a giant library on wheels rumbling across the English countryside, an ex-soldier with a dark secret, a lazy but lovable dog, an old zookeeper with a talking parrot, an abandoned manor in the middle of nowhere... 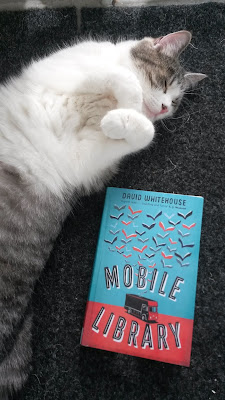 At the heart of everything is the notion of family, but not the traditional, old-fashioned sense of the word, but a refreshing view:

Family is where it's found.
Family doesn't have to be a father, a mother, a son or a daughter. Family is only where there is love enough. For them it was there, in that unlikeliest group of people... the Boy, the Queen, the Princess and the Caveman.

In traditional fairy tales (e.g. Cinderella) and a surprising number of modern children's stories (e.g. Harry Potter), the "real" biological parents and relatives are usually 'good' and the non-biological stepmothers, stepsisters etc. are often 'evil'. Whitehouse pretty much turns this setting upside-down. In his novel, biological ties are not necessarily unbreakable, everlasting or sacred. Without love, families simply do not function or even exist, and blood is not always thicker than water. New families can be formed and found in all shapes and sizes. What unites people is a need to love and be loved, a yearning to be understood and wanted.

Whitehouse's story is tender and funny, quirky and exciting. But at the same time, the book is also hearth-breaking; full of loss, cruelty, bullying and even violence (usually involving children). Still, Whitehouse shows mercy and compassion towards his main characters.

This book is a true fairy-tale adventure, mesmerising and sad, but oddly consoling. I hope that it will be translated into Finnish as well. :)

The Guardian: "Mobile Library by David Whitehouse review - an adventure for bibliophiles"
klo 15:24