There was a huge gap in my education: a gap the size of P. G. Wodehouse. Yes, the name 'Wodehouse' was vaguely familiar to me (although its correct pronunciation was not), and everyone has heard of Jeeves the butler, but for some reason I just hadn't actually picked up one of his books and read it. Until now.

(And what made me do it now? The random fact that I was watching Fry's Planet Word, the BBC documentary series about language presented by Stephen Fry, in which he mentions Wodehouse as one of the greatest story-tellers and masters of language in literature. And since I have nothing but respect for Stephen Fry and his opinions, I had to find out for myself.)

Hot Water is not even "a Jeeves novel", but I wanted to try reading Wodehouse in English (as opposed to something translated into Finnish) and this was one of the few untranslated Wodehouse novels that was available in the local library.

Wodehouse certainly demands a certain kind of mind-set and attitude. Some people say that no matter what mood you're in, once you start reading one of his books, you'll immediately feel better. Personally, I found Hot Water funny, entertaining and clever on the one hand, but also occasionally confusing, annoying and even boring! Perhaps the novel had its good and bad moments, or perhaps it just depends on the reader's mood... 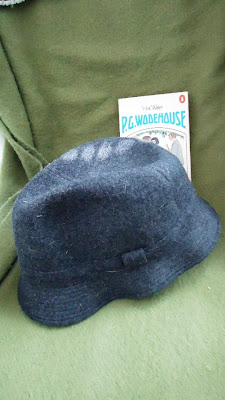 The language was a bit of a challenge. I bet some of the strangest expressions are unfamiliar to a native English reader - let alone a non-native one like me! :) It's all very witty, proper, upper class, stiff-upper-lip Englishness... And at the same time Wodehouse is exaggerating wildly, parodying the way the upper classes speak.

What to say about the plot... The novel is set in a château in Brittany, France, where the Vicomte Blissac is hosting a party. The problem is that the Vicomte Blissac doesn't seem to be who he says he is. And some of the guests are also pretending to be someone they're not. Important letters go missing, a senator is blackmailed, a girl is engaged to be married, someone falls in love, someone falls out of love, some people get drunk, others hide in a boat, and some safes may need to be blown open...

The result is an intricate, confusing mess of a plot that I personally found difficult to keep up with. Too many characters, too many false identities, too many hidden secrets and motives... Michael Frayn's Skios was very similar to this novel, only I enjoyed Frayn's novel more.

Maybe this wasn't a good choice in terms of first Wodehouse novel to read. My wife read another one called Quick Service (her first introduction to Wodehouse as well), and apparently she is now some kind of a fan! She is reading another Wodehouse novel and two others have somehow already found their way into our bookshelf.

So Hot Water didn't convince me that Wodehouse is some kind of genius, but I suppose I should give him a second chance. Maybe with one of those Jeeves stories...

Finally, I bit of wisdom from Hot Water:

If fewer people went about the place pretending to be lizards, this would be a better and a sweeter world.