I'd never felt more myself. Or more in tune to what I was and what I was capable of. A moment of authenticity when fate and blueprint collide and everything is not only possible, but within arm's reach. And I fell in love.

It's been almost six years since I read Sarah Winman's debut novel When God Was a Rabbit (Kani nimeltä jumala in Finnish), just on the basis of the front cover and the description on the back. A year ago I read her second novel, A Year of Marvellous Ways (Merenneidon vuosi). Both were OK, but no more than OK, so I wasn't expecting much more from Winman's third novel, Tin Man.

In fact, I was so unexcited about the novel that, after borrowing it from the library with the intention of reading it, I kept moving it lower and lower down in my pile of TBR books until finally the inevitable day came when I had renewed the loan six times (the maximum!), i.e. selfishly kept the book - still unread - in my pile for more than half a year! So it was clearly time to read it, pronto, and then sheepishly return it to the library for others to enjoy. :)

And what a treasure had been waiting between the covers within arm's reach without me knowing about it! Tin Man reminded me of David Nicholls' One Day and Hanya Yanagihara's A Little Life, both of which I loved.

The novel tells the story of Ellis and Michael, two boys who meet at the age of 12 and become inseparable. Their friendship lasts through their teenage years and on into adulthood, gradually evolving into something that could be, might be, maybe. Then something happens on a nine-day trip to France and there is another version of the future up for grabs...

Afterwards, the past becomes a secret that the men keep from everyone, even from one other because we don't know what to do about the thing we were. So we stay away from it and don't touch it, in case it stings. Avoidance is a dock leaf.

(I had to google dock leaf - it's the leaf that is used to soothe nettle stings!)

Then along comes Annie and changes everything, because she is the key to unlock one of the men. This love and friendship triad forms of the heart of the novel, but is in no way a traditional love triangle of jealousy and bitterness. In a way, both men love Annie, but differently, and they love each other, but differently. And that is the beauty and tragedy of it all.

Who were we, Ellis, me and Annie? I've tried to explain us many times but I've always failed. We were everything and then we broke.


I don't want to say much about the story itself, because I don't want to spoil anything. There is no chronological plotline; the narrative moves between the past and the present with various dates mentioned in the beginning of some chapters and major events (fall of the Berlin Wall, the AIDS epidemic) revealing the time. 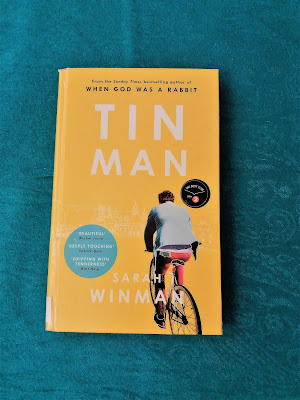 Tin Man is a story about first love, which sounds cheesy and overly romantic, but despite its lyrical, achingly beautiful language, the book does not portray love or relationships as perfect, but realistic - with all the longing and sadness and loneliness that may be involved. And that's what makes it all the more touching.

Tin Man is a story about love and loss, but also about Vincent van Gogh's "Sunflowers" and Walt Whitman's poem "O Captain! My Captain!" And also about The Wizard of Oz! Funny coincidence (or the author's intention?): when I reviewed When God Was a Rabbit in 2013, I mentioned that the ruby red slippers on the cover reminded me of The Wizard of Oz. Now, "Tin Man" is clearly a reference to The Wizard of Oz and the Tin Man, looking for a heart to make him whole!

Goodreads: Tin Man (P.S. The Goodreads community seems to agree that this is better than Winman's previous novels: the rating is currently 4.01, better than the ratings of her other two books!)
Tinder Press: Tin Man
The Guardian: "Tin Man by Sarah Winman review - an exquisitely crafted tale of love and loss"
klo 21:35