"Please step right this way," the old man beckoned. Beyond the inner door was a shadowy corridor lit by a single flickering bulb. We stepped into the dying light.

Haruki Murakami is a master storyteller and especially a master of short stories. Despite this, none of his short story collections have been translated into Finnish. Only novels. (The newest one, a translation of Hard-Boiled Wonderland and the End of the World entitled Maailmanloppu ja ihmemaa, will be published next month.)

The Strange Library is an individually published short story, or a novella, or a children's picture book, or an art book, or a collage or... I don't even know what it is. I think in this case pictures definitely speak louder than words. This is what the front cover of my edition looks like: 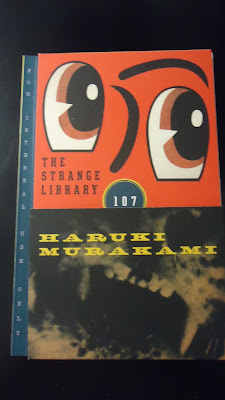 There's an ominous warning on the side: "For internal use only". The cover pages open like flaps: 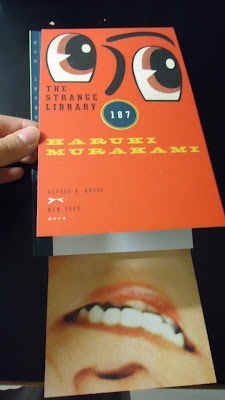 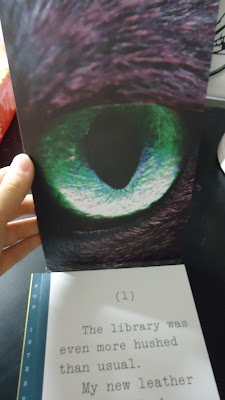 A creepy, laughing mouth. A hypnotising eye. And then there's the first page and the story begins: 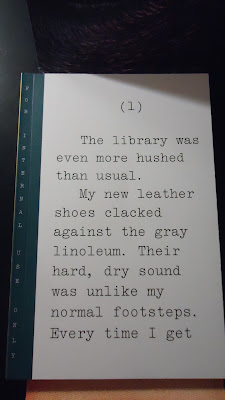 The Strange Library tells the story of a young boy who finds himself trapped in the basement of a local library. And this is not a homely, bright, inviting book-lover's library, but a dark, creepy, truly strange library. An old man forces the boy to sit in Room 107 and tells him that he has one month to memorize three books from cover to cover before he can go home. An ethereal girl and a sheep man (very Murakamiesque!) visit the boy and try to help him. There are doughnuts, a full moon, a black dog and the Ottoman Empire. The reader can't be quite sure what is fake and what is real. The creepy story is like a distressing nightmare that you want to wake up from, but can't. 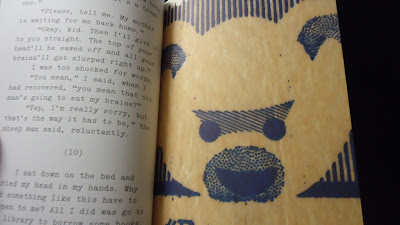 The story is full of mysteries, symbols and allegories that went way beyond my understanding. :) But maybe nightmares like this are not meant to be understood on a rational level. The story was also surprisingly dark and depressing for Murakami, and certainly very dark for a children's book (as the book is categorised). But I liked the way the pictures complemented the tale and made it more visual and dreamlike. 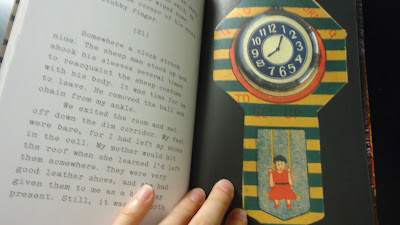 So a word of warning: don't read this as your first Murakami or you may be too confused or depressed to read any of his other work. ;) But the book is still worth a read if only for the quirky twists and turns that the illustrations add to the story.